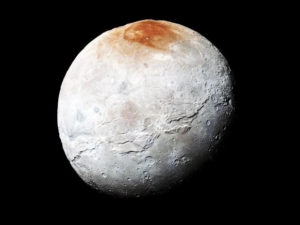 Charon’s dark-red colored north polar zone, discovered (Figure 1) by the New Horizon’s spacecraft’s Multispectral Visible Imaging Camera (MVIC), may be one of the most visible examples of exospheric cold trapping in the entire Solar System, owing to the combined effect of Charon’s surface temperature, extreme seasonality, radiation environment, and gravitational interaction with Pluto (see below). By weaving together novel laboratory experiments, state-of-the-art exospheric model, and radiative-transfer photometric model, we seek to understand the physics within the Pluto-Charon system responsible for the unique red albedo on this enigmatic moon.

The Red Material: What is it?

The possibility of reddish ‘tholin-like’ material, synthesized by Ly-a photolysis of cryo-condensed methane gravitationally captured from Pluto by Charon, was proposed soon after the 2015 New Horizons encounter. Methane frozen out of Charon’s exosphere is converted into complex, heavier hydrocarbons by solar Lyman-α light backscattered by the interplanetary hydrogen onto the polar night zone (see by Grundy et al., 2016). Subsequent processing by solar wind and other energetic sources could further transform the stickier hydrocarbons into the red-colored refractory tholins, the details of which we will reveal using modeling and laboratory experiments.

Building on the seminal work of the New Horizons team, we have combined a Charon exosphere model with novel ‘dynamic’ photolysis experiments to obtain for the first time a distribution of complex photolytic hydrocarbons on Charon’s surface from ~ century-long exposure to Lyman-α. Our models reveal Charon’s exosphere to be subject to extreme seasonal dynamics, as spring sunrise rapidly drives the methane frost off the poles and into the exosphere near every equinox. However, exospheric methane liberated from the spring polar zone is quickly recaptured onto the cooling autumnal polar surface as it recedes into winter night. This seasonal methane swapping between the polar zones has been explored in depth for the first time with our exosphere research. For more details, read our manuscript published in Geophysical Research Letters.

Our novel ‘dynamic photolysis’ experiments provide new limits on the contribution of interplanetary Lyman α to the synthesis of the Charon’s red material. These experiments, during which methane condensation is carried out in an ultra-high vacuum chamber while under exposure to Lyman-α photons, are designed to replicate more accurately than any previous experiments the conditions of Charon’s polar night zones. An important finding from these experiments is that the flux ratio of CH4 molecules to Lyman-α photons is the key determinant of photoproduct yield and refractory tholin composition. The photo-conversion cross section extrapolated from these ultra-realistic experiments is fed back into the exosphere model to estimate the photolytic refractory distribution across Charon’s surface. For additional details, read our manuscript published in Science Advances.

Our research combining spacecraft data, laboratory experiments, and exospheric modeling, has produced insightful discoveries vital to weaving a complete and consistent understanding of the origins of Charon’s remarkable red albedo.

Yet to be explored is the question of how the solar wind affects the composition and color of Charon’s hydrocarbons. With continued support from NASA’s New Horizons Data Analysis and other scientific research programs, the next phase of our experiments, in tandem with newly upgraded exospheric models, will seek to answer this and other essential Charon questions.